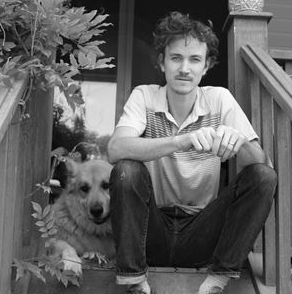 Ian Felice (Felice Brothers) returns to the Night & Day Café in support of his latest album, In the Kingdom of Dreams. This is Ian’s first solo album away from the Felice Brothers (although brother James plays drums and brother Simon produces) and the albums acute observations and surreal images are front and centre tonight.

First up is Nick Panken, who is on a first solo tour without his usual band Spirit Family Reunion. Opening with On that Day, a slow contemplative ballad accompanied by a keening mouth organ. Next came further tracks from his album Consequential Breach including In the Manner That It Came, A Generation More and the set also included covers of Bob Dylan’s tribute to Black Panther leader George Jackson and a Blind Alfred Reed song You Must Unload a song covered on Ry Cooder’s recent album A Prodigal Son. Nick’s singing and playing reminded me a lot of this album which is by no means faint praise.

Felice’s set comprises of tracks from the current album, Felice Brothers’ tracks and new material as well. It opens with In Memoriam, a melancholy breeze of a tune that speaks of losing a parent. In these troubled times, politics can never be far from people’s thoughts and though never directly mentioned, 21st Century and a new song Saving Up To Be President take an absurdist and funny route highlighting some of today’s problems.

In the Kingdom of Dreams is an album that was recorded at a time of great personal change for Ian and this is beautifully reflected in ‘Water Street’ a tale of a new period, a new wife and baby and the change of pace of a life shared. In a similar vein is Signs of Spring where Ian’s guitar became a percussive platform for the ringing chords to intertwine with. It’s a beautiful lyric, simple and affecting and was my favourite song on the night.

Ian announced to the appreciation of the crowd that a new Felice Brothers album has been recorded and is due in April 2019. He joked with the crowd about touring it and mentioned getting a residency at the Night and Day which would certainly be welcome. He then delivered some of the new songs Days of the Years of my Life and Special Announcement The show was closed with three Felice Brother classics, Saint Stephens End, Cherry Licorice and finally Ballad of Lou The Welterweight.

The whole evening was chilled and laid back and a perfect Sunday evening for the small but appreciative crowd. I look forward to the next time Ian and Nick are over here.