It’s traditional this time of year to take in a family show to keep young and old alike entertained for a couple of hours or so, with pantos a plenty and musicals on mass, you may want something a little quirky, a bit different: step forward Släpstick from Wëreldbänd.

Wëreldbänd are a Dutch musical theatre troupe, who present a love letter to the golden age of silent cinema: Buster Keaton, Spike Jones, Laurel & Hardy, to name but a few, are all represented here. The five–man group create a musical hall experience like no other, playing well over a 100 instruments between them: all this mixed together creates a unique and original experience that will have you grinning from ear-to-ear.

The show begins when you’re queuing to get into the theatre as you meet some of the cast members in various guises. However when the show starts properly, we are introduced to a wide range of colourful comedy characters, from a fast talking American showman to an injured swan and a barbershop quintet whose numbers reduce throughout the night due to a series of unfortunate accidents. There are German versions of Bohemian Rhapsody and Up Town Funk which are inexplicably hilarious.

The show is like an episode of Monty Python’s Flying Circus, absurd, silly and packed full of great physical and visual gags: you’re never sure where it will take you. There are call backs to previous jokes, there is something for everyone. All five performers are super talented musicians and entertainers: there isn’t a musical instrument that these guys don’t play: from a flying double bass, to the swan egg whistle (you have read that correctly) – if it can make a sound, they’ll play it.

It’s not just music that makes the show but the art of playing the clown, with each member of the group involved in some fantastic physical set pieces, from an unflattering seduction scene using Italian and Spanish loves songs that pretty much turns into an episode of the much loved and much missed BBC sitcom Bottom.

Some routines do out-stay their welcome a little bit too much and the show could do with a slight trim off its running time, but these are minor quibbles for what is a clever, at times touching and often astonishing piece of work that will entertain young and old alike, and is the perfect Christmas show for those who fancy something a little different. The shows finale quite literally brings the house down and ends the show with a standing ovation and a huge audience pillow fight: well I did say this was something a little different!

Släpstick is at Home till the 22nd December tickets available at https://homemcr.org/production/slapstick/ 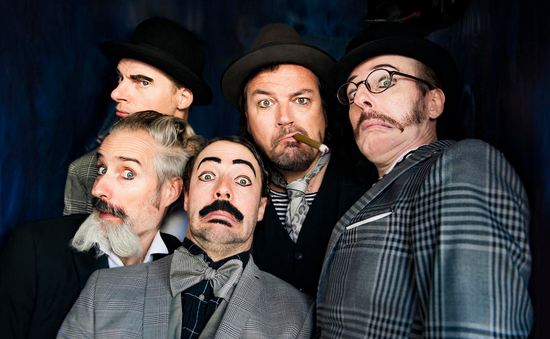