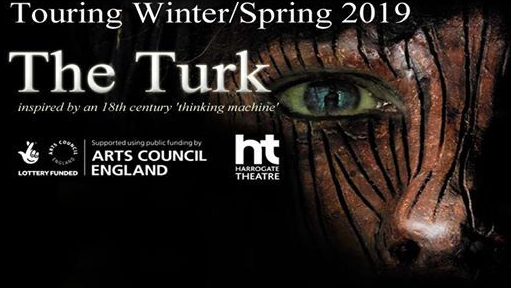 The Turk: The Studio, the Lowry⭐️⭐️⭐️⭐️

Reviewed for The Reviews Hub.

It’s hard to see what relevance a true tale some 250 years old about an incredible ‘thinking machine’ has today . The Turk director Sylvia Vickers and actor/writer Michael Sabbaton have crafted a story of mystery, madness and remorse that has more to say about the current situation in the world than you may at first think.

We are transported to 1838 and aboard a ship on route from Cuba to Venezuela. Below

deck we find German inventor, engineer and showman Johann Maelzel (Sabbaton). Riddled with yellow fever and suffering delirium, his only company on the journey comes in the form of numerous cargo boxes, several bottles of wine and the head of the world famous Automaton Turk: a mechanical contraption constructed from cogs and the most advanced technology of the age. The Automaton Turk was designed to play chess. 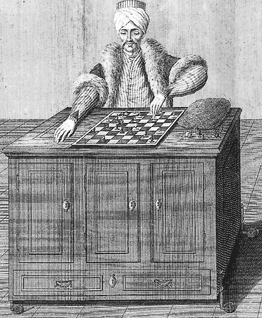 As Maelzel slowly begins to rise from his fever-induced slumber, knowing death is close at hand, we hear of the Turk’s origins. Created by inventor Wolfgang Von Kempelen, this mechanical marvel would do battle with chess champions from across all over Europe, wowing audiences in royal courts across the land.

Following Kempelen’s death, Maelzel comes into possession of the device: his own engineering background and gifts as showman lead to the mechanical marvel being pitted against such notable historical luminaries as Napoleon, Beethoven and Edgar Allen Poe. However Maelzel’s lavish lifestyle and over indulgence soon leads to ruin and it is here we find him broken, devastated by the death of his best friend and assistant, William Schlumberger. Racked with guilt, filled with rage and regret, Maelzel is a man to trying to repent for his sins and making one last futile attempt at defeating the Turk.

The Turk is truly an extraordinary piece of work, from the moment the drama begins the ship is brought to life by a haunting, atmospheric sound design; so much so that you can almost feel the salt water on your face and the sway of the boat. This is a one-man show with Sabbaton putting in a captivating, powerhouse of a performance: filled with anger and remorse we get an insight into the diseased mind of a man who had it all and lost everything. Occasionally we get a glimpse at the showman, as darkly comic song and dance numbers puncture the action and are a brief respite from Maelzel’s fevered nightmare whilst providing the opportunity to show what a gifted and versatile performer Sabbaton is. This is a bold, brave, performance that has a great deal to be admired and is superbly directed by Vickers.

The script raises some intriguing talking points: on the surface, there are constant references to life being like a game of chess, and how each move should be measured more carefully or it may lead to our downfall. However much more than that, this is a parable warning about our reliance on technology and the inevitable prospect we face when technology overtakes us. It asks questions about the rise of artificial intelligence and the impact it could have on us.

The production is not without flaws: at times it felt laboured and occasionally repeated itself. The script could certainly do with a trim. To get the most out of the production, it would be advantageous to have some prior knowledge of the subject matter and the characters involved: it will definitely help to enhance your enjoyment and appreciation of the performance.

This is an original, intelligent production, superbly acted and crafted with the greatest care and attention to detail by all concerned. This is thought provoking, challenging and well worth a watch.