The Animals and Children Took to the Streets – Home, Manchester

Written on behalf of Opening Night

For nearly 15 years the 1927 theatre company have been pushing the boundaries when it comes to theatre. They have gained quite the reputation for their bold, innovative productions which has seen them marry live performance and music with animation and illustration to create a theatrical experience like no other.

For their latest offering The Animals and Children Took to the Streets, writer and director Suzanne Andrade again uses all these tools to create a satirical, jaw-dropping production that will leave you mesmerised and entertained.

Andrade transports us to the dark, dank Red Herring Street, on which stands the Bayou Mansions. This is a tower block located on the wrong side of town, housing the worst of society, from social misfits to murderers and sexual deviants; they all have a place here.

The authorities and the rich have chosen to ignore their plight, deciding to let them implode. However, when a gang of feral children from the Mansions go on a destructive binge that includes kidnapping the mayor’s beloved cat and running amok on a park for the middle-class, their mini-revolution does not go unnoticed. In retaliation, the Mayor takes drastic action!

The children’s only hope of escape comes in the form of the Bayou Mansion’s caretaker; a man who is desperate to woo Agnes Eaves, a middle-class do-gooder, who believes dried pasta collages and art classes are what the kids need. Agnes’s daughter, Evie has been caught up in a police round-up and only the caretaker knows what’s happened to them. 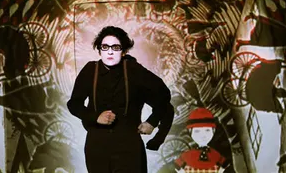 This is 70 minutes of pure joy, innovative, smart and darkly comic, this production is pitch perfect. Paul Barritt’s animation lies somewhere between a LS Lowry painting with some Terry Gillian sketches thrown in. Add into the mix the clear influence of 1920’s silent cinema, specifically the films of Fritz Lang and Georges Méliès and you have a visual feast that will leave you howling with laughter, whilst having a good old scratch as we see the rats, lizards and cockroaches that infest the Bayou scurry across the screens.

Andrade’s script is razor-sharp, witty and brutal and clearly has a take on social inequality and the continual struggle of the working class who are denied the opportunities afforded to the privileged. The script is supported by three super talented performers in Felicity Sparks, Genevieve Dunne and Rowena Lennon – whose facial expressions alone are worth the price of admission. Their performances in conjunction with Barritt’s animation beautifully tell this story and breathe life into a highly original, rewarding piece of theatre.

The Animals and Children Took to the Streets is at Home until 16th February.