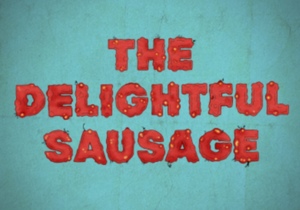 The Delightful Sausage: Regeneration Game – The Lowry, the Studio

Comedy is littered with numerous double acts from Laurel and Hardy, to Morecambe and Wise, French and Saunders to Rik Mayall and Ade Edmondson, all with unique acts, but all with one key element in common: chemistry. The chemistry between each pair is what made them so beloved. With this in mind, The Delightful Sausage have this comedy lark sewn up already because not only do they have great chemistry, but they are bloody funny as well.

Amy Gledhill and Chris Cantrill serve up a delightful, if slightly twisted evening of comedy, with their latest show, Regeneration Game: the show is mixture of sketches, video clips and animation. Set in the fictional Northern Hamlet of Icklewood and their bid to become the next capital of culture. Through their bidding committee, we take a look at the history of Icklewood and all that it has to offer, which includes meeting the town’s founding father, a rather well endowed Quaker, as well Mr Tinnitus, a hideous recreation of Narnia’s Mr Tumnus who resides in Icklwood’s national park.

We are also treated to a preview of Cantrill’s latest, misguided latest play on feminism, which will not be winning a Tony award anytime soon. In addition there are numerous mock adverts show-casing the fine businesses and sponsors of Icklwood’s bid that include the Hale & Plaice chip shop, and Jerry’s Bric-n-Brac Shack, which was born from a seemingly very messy divorce.

Instantly what strikes you is the confidence and sense of fun from both Gledhill and Cantrill. For an hour they send themselves up and bounce off each other. Their material is at times unique, inane and ridiculous. Like any great sketch show, the gags come at pace, are a mixture of snappy dialogue and contain some great visual jokes and never outstay their welcome.

The animation is a huge part of the show: crude and nightmarish and that fits the show perfectly. It’s very much a Pound Land, Terry Gillian style, which adds to its charm.

With an hour running time, the show is sharp, punchy, quick and leaves you wanting more. With a dark under belly, a unique take on Northern life, and a host of of comic characters at their disposal, the pair more than earn their comparisons to the now seemingly retired League of Gentleman and if given the platform, could occupy the void they left behind.