There is something quite satisfying arriving at a gig and seeing a big gong on stage: rather like a cow-bell, these are criminally under used musical apparatus’ that offer a great deal to any song! However why should I expect anything less from White Denim, for this is a band who have gained a fierce reputation as a solid, if unpredictable, live band who seem to embrace a jazz ethos rather than straight up rock-n-roll.

With a career spanning a decade, spawning eight studio albums and an imminent ninth, it would be fair to say that the Texas outfit are as prolific as they are talented. With such in extensive back catalogue, it’s little wonder that the band plough through a 30 song set-list. Drawing heavily on their last album Performance, the band kick the night off with the upbeat, sun-kissed Backseat Driver, followed by Moves and the 2011 hit Drugs. 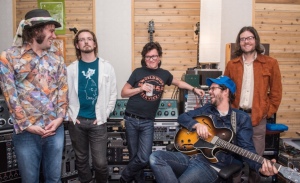 There are two things that instantly strike you about the White Denim lads: the first being that they are an exceptionally talented group of musicians. Frequently during tonight’s gig, the band will drift off into improvised flights of fancy and whilst this demonstrates musicianship of the highest order, it can seem a little repetitive after a while, not that the audience seem to mind.

The second is that they clearly love what they’re doing, as demonstrated by the constant grin on singer James Petralli’s face. His playful banter with the crowd certainly helps fill the gap between songs. You certainly get the sense of their camaraderie and friendship that you can only have by spending ten years on the road together.

Evoking such a mixture of bands as Yes, Credence Clear Water Revival and Steely Dan: White Denim are flying the flag for progressive and experimental rock, which may seem dated but who else can say they’re doing that at the moment?

The band is currently on a UK tour during February and then they are back in the UK in Junez to support Noel Gallagher’s High Flying Birds at his huge Heaton Park show. BTickets available through: https://whitedenimmusic.com/live