Mark Watson: The Infinite Show – The Quays Theatre, the Lowry 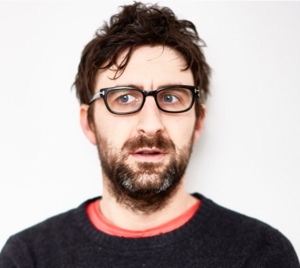 In 2018 Mark took his latest stand-up, The Infinite Show to the Edinburgh Fringe. The show was a huge commercial and critical success, with four and five star reviews across the board. The subject of the show is empathy. Following a much-discussed messy divorce, Watson is on a quest to gain a greater understanding of the people in his life: from his nine-year-old son, right through to the irritating wine expert parent from his children’s school. Even his audience members across the land, regardless of how strange or quirky they may be, Watson wants to emphasise with us all. 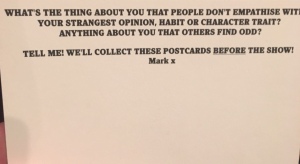 Before the show began the audience are handed a card with three questions on: What’s the thing about you that people don’t empathise with? Your Strangest opinion, habit or character trait? Anything about you that others find odd? It is a brave move by any comic to have an audience play such an integral part of their show, however luckily for Watson, and the audience, those who participated offer a wealth of material, including a man who hasn’t brushed his teeth since the 1990’s, an unusual hatred of dolphins and one audience member that had a league table of comedians she had watched, with Watson currently in second hoping to replace Al Murray at the top: it made for quite a compelling subplot throughout the night.

This unique and slightly brave device for a routine allows Watson to demonstrate what a gifted comic he is. It certainly demonstrates his quick wit and ability to think on the fly. Despite the comedy gold the audience provided, Watson still manages to work his own material that includes an on point dressing down of Center Parcs, and an ill-tempered night watching the Strictly Final with his son.

Watson comes across as nervous, yet full of energy, bouncing off audience members in the room; an entire five minutes of the show is spent distilling the plot to popular films from the 80’s and 90’s for the benefit of a 13-year-old in the crowd, highlights just what a gifted performer he is. The show is somewhat bitter sweet: certainly, a funny entertaining night of comedy, made even more tragic as it came as a result of Watson’s divorce, which is covered in great detail. It’s fair to say that some great comedy is born out of some fairly tragic circumstances and The Infinite Show certainly fits that description