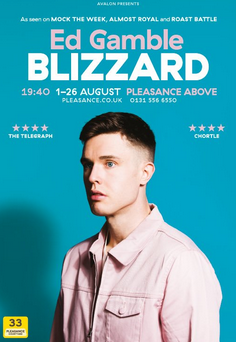 Ed Gamble’s star is certainly on the rise: he has his own podcast with fellow comic James Acaster, numerous television and panel show appearances and he occasionally hosted a show on Radio X. Gamble is one to watch on the comedy circuit and based on tonight’s show, you can certainly see why. He is a confident natural performer, with a cheeky charm and razor-sharp wit.

His latest show, Blizzard takes its name from an unexpected extended holiday where Gamble and three fellow comics were stranded in New York due the fierce weather conditions. The story managed to make the BBC’s news page, where Gamble was described as a “diabetic comic”, rather than some glowing endorsement Gamble could have used on a poster. What follows is a routine about what being a type 1 diabetic entails, including the public fear of insulin pens and factual inaccuracies in Hollywood blockbuster Con Air. The mere fact that Gamble can get any comedic routine from diabetes and make it work shows just what a gifted performer he is and deserves a great deal of credit.

Following the interval, Gamble’s set looks at his relationship with sex and his awkwardness with it: some of it has its moments but feels a bit flat. Gamble soon gets things back on track with gags coming from his experience in the Edinburgh Dungeon as a solo traveler and a finale involving Gamble’s Dad’s kitten and some emails to the vet: with Gamble playing the part of Dad and kitten in the scenario. The finale sums up Gamble perfectly: a comic full of energy, who has a gift for ad-libbing and the ability to gauge the reaction of an audience to see just how far to push a joke. At times his material is not always the strongest, however he’ll win you over with his charm and enthusiasm and delivers an entertaining night of comedy.