Originally reviewed on behalf of The Reviews Hub

Following on from last year’s successful productions of A midsummer Night’s Dream and Romeo and Juliet at the Epstein Theatre, they once again have turned to the bard to welcome in the spring with something far more sinister; Macbeth.

“The Scottish play” is as revered as Hamlet and King Lear and is quite rightly celebrated as a Shakespearean masterpiece because it has everything: power, lust, betrayal, murder and a hefty dose of the supernatural.

In this day and age it seems popular to update Shakespeare to a more modern climate however director Daniel Taylor has quite rightly gone down the more traditional route, keeping the play in its 11th century setting.

Opening with Macbeth and Lady Macbeth making their way through the theatre, they walk on the stage only to stop in front of an eerie tree flanked by mist and under a blood 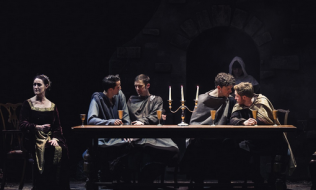 red sky which perfectly sets the tone for the production. We are introduced to Macbeth and his comrade in arms, Banquo as they travel home victorious in battle. They gloat of their triumphant victory; however this is cut short when they encounter three sinister women and a little girl in the woods. The women have differing prophesies for the two friends: for Macbeth, he is told that he will soon be king, for Banquo that his son and subsequent children will take their place on the throne.

Macbeth takes these messages to heart, and soon he and his ambitious wife are plotting their ascension to the throne: a plot that will have its fair share of betrayal and bloodshed.

Despite its limitations, this is a production that uses its strengths to its advantage. In Sean Jones you have a Macbeth that, despite his initial reservations, grows into the role as the narrative progresses, with every passing moment you see him drawing more and more strength, despite his crimes becoming more grotesque. Jones is an intriguing, charismatic villain, aided by an equally impressive Tracy Spencer-Jones as Lady Macbeth, the Machiavellian accomplice whose quest for power and ruthless streak  is the driving force behind the play. The pair have great chemistry with each other and put in suitably formidable, unnerving and understated performances. Despite a few accent issues, the supporting cast are engaging and solid throughout. Special praise must go to Lenny Wood, whose scene stealing turn as the Porter was a breath of fresh air and a moment of light relief from all the plotting and murder.

Writer Helen Jeffery and director Daniel Taylor have on the whole remained faithful to the text. There are a few little tweaks here and there but these work perfectly fine and don’t detract from the production.

The most striking aspect to the production is just how atmospheric it is. From the musicians at the back of the stage, through to the expressive lighting and sound design by Peter Mitchelson. Mitchelson has crafted a cold, intimidating design which brings to the forefront the supernatural and horror of the story. Taylor has decided to use the whole theatre as the stage, which while it doesn’t make the audience complicit in Macbeth’s crimes, it does add an immersive quality to the experience.

This version of Macbeth whilst doesn’t break new ground it has everything you want: great story telling, fine acting and a production that will shock and entertain. It’s certainly a fine example of a Shakespearean production performed outside of London and Stratford-upon-Avon.