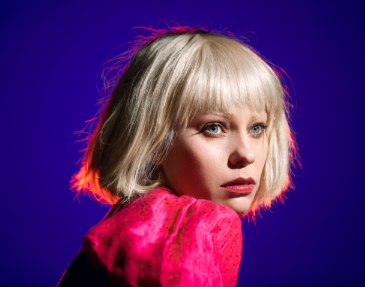 This week saw a heatwave hit the UK of proportions none of us were prepared for: cue office staff complaining that they don’t mind it hot but this is “too hot”, and town centres across the land festooned with men of all shapes and sizes strutting about the place as if they were Adonis himself. With this in mind, the prospect of reviewing a gig by an artist called Olympia in a sweaty basement right in the heart of Manchester’s city centre filled me with dread, however for several reasons this proved to be one of the coolest nights of the summer so far.

Olympia (Olivia Bartley) is an Australian singer, songwriter touring in support of her

second album Flamingo. Armed with an electric guitar, a soft sensuous voice and the ability to spin a good yarn, this talented songstress has been wowing audiences worldwide since her 2016 debut release Self Talk. Despite the soaring temperatures outside, the basement of Manchester venue Yes, was turned into a den of cool, in part due to the spot on air-con but mainly due to Bartley’s laid back performance.

With a blue neon backlight, Bartley works her way through an hour long set which included Won’t Say That and singles, Star City and Hounds, as well as stories about her family catching a shark and keeping it in a bath tub and an awkward meeting with the coach of the Australian cricket team, the show is a laid back affair that breezes on by, despite the weighty subjects of desire and grief being addressed in some of the songs. Blending her restrained, melancholic vocals, with a fuzzy, yet sun kissed guitar style this was a great showcase for a talent you’ll be hearing a great deal more from in the future. A deep, soulful, yet cheery performance, that fitted its surroundings perfectly.

Olympia isn’t back in the UK now until September but make sure you catch her when she returns!