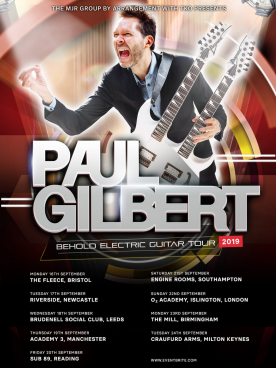 Over the course of the bank holiday, it would be fair to say that getting out into a beer garden and having a few ales with friends is pretty much standard: this bank holiday was no different, some live sport (go the Wire!), and some live music to boot. Whilst out my friend and I were discussing live music and how, in his words, “guitar music is dying on it’s arse”. I wasn’t having any of this and looked for some upcoming guitar gigs and it’s here that I came across Paul Gilbert.

Gilbert is touring the UK in September in support  of his latest album titled Behold Electric Guitar. Gilbert is a hugely respected, critically acclaimed ‘Axe–Man’, who regularly features in guitar polls as being one of the greatest guitarists of all time.

Gilbert started out with with Los Angeles band Racer X in 1985, eventually leaving them in 1988. He would later rejoin the band but would also embark on a successful solo

career as well. With a back catalogue of over 15 albums worth of material and sighting the likes of Gary Moore, Jimi Hendrix and Jimmy Page as influences, his live shows have the potential to be something pretty special: a musical feast of classic American rock and new metal which will appeal to guitar freaks and head bangers and those who like their music turned up to 11!

The latest album is packed full of muscular, ferocious tunes like the opener, Havin’ It and the superbly titled Sir, You Need to Calm Down. In addition the album has a 70’s groove vibe to it with the equally impressively titled A Snake Just Bit My Toe, and the jazz-rock fused Love is the Saddest Thing.

For those who like their gigs loud and performed by excellent musicians at the top of their game then Paul Gilbert’s shows this autumn will be for you and a shining example of why rock and roll is still alive, kicking and making a big fuckin’ noise! I’ll be heading down to Manchester Academy on the 19th September and I hope to see you there.