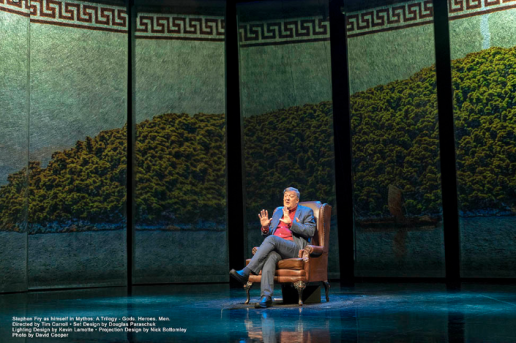 Written on behalf of Reviews Hub.

There are certain actors, performers and comics who you would pay good money to see even if they were reading the Yellow Pages; Richard Burton, Sir Ian McKellen and Stephen Fry would all fit the bill. Thankfully, Fry isn’t tackling the helpful canary coloured directory, instead he is taking on the classics as part of his Mythos Trilogy: Gods. Heroes. Men.

Mythos: Men is the final 150 minutes of Fry’s Herculean effort to distil the myths, stories of Zeus, Poseidon, Hera and the other Gods of Olympus into a seven hour performance.

This instalment opened with Fry lying motionless on stage, a huge series of screens at the back of him projecting a beach and this is our introduction to Odysseus and his 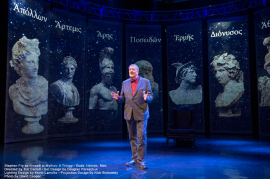 involvement in the Trojan War. We are then taken on a journey through the various characters who make up this timeless tale, which includes the near indestructible Achilles through to the enchanting beauty that is Helen of Troy. For the next two-and-a-half hours we are treated to tales of heroism, deceit, betrayal and tragedy as we see how the Trojan War plays out and what happens after it is all over.

Having been lucky enough to attend the two previous performances it is abundantly clear that Fry’s aim these shows is to take us back to the noble art of storytelling: from family elders to poets, authors to singers and luckily for us Fry is one of the best in the business. He sits in a comfortable looking throne like leather chair, armed with tales aplenty to tell. He is clear, funny and engaging throughout, his warmth, love, and passion for the subject shine through which makes for a compelling, entertaining production.

Throughout the evening Fry uses his gift for comedy to play the various characters: including a spot on impression of Brian Blessed and Alec Guinness in full Obi Wan mode. In addition, there is a spot of audience participation, with audience members invited to E-mail in questions, as well as the ancient Greek equivalent of popular board game Trivial Pursuits, renamed ‘Mythical Pursuits’ .

Fry is aided by series of projected images courtesy of Nick Bottomley; the visuals include the infamous wooden horse that brought down the Trojans and Odysseus’ impressive but rapidly diminishing fleet of ships, whilst also highlighting some of the truly beautiful works of art these stories have inspired.

You certainly did not need to have been present for all three performances or for that matter have any prior knowledge of the myths, just sit back and let a true master do his work and allow the stories to wash over you. Fry mentioned the recent heroics of a certain English Cricketer, Benstokeus over the summer, well based on Fry’s knowledge and impeccable delivery, Stephenfryus surely falls into the category too.