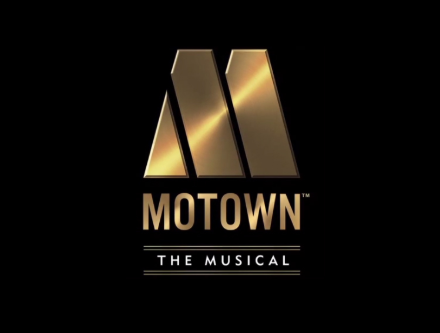 If you can cherry pick from a back catalogue of one of the most successful record labels in popular music, a label that spawned well over 100 US top 10 hits, then you have somewhat of a head start on your competition. Throw into the mix the classic rags-to-riches story, filled with love, jealousy and betrayal then you have the elements for an entertaining night at the theatre, which Motown The Musical, certainly delivers on.

Telling the story of label boss Berry Gordy, a former Detroit car factory worker who had the vision of putting his production line experience to good use. He created a hit making record label that introduced the world to such stars as Marvin Gaye, Stevie Wonder, Smokey Robinson and the Miracles, and Diana Ross and the Supremes.

Opening with a bitter, angry Gordy (Edward Baruwa) refusing to attend a TV special in his honour a celebration of 25 years of Motown. However, at this point Gordy and Motown are staring at the abyss, the label has lost all it’s big stars and financially is in hot water.

What follows is a journey through its history, right back to its humble beginnings, with Gordy meeting Smoky Robinson (Kane Matthews) and thus Motown had its first act. We see the label grow in strength, signing more acts, having hit after hit. It’s the emergence of a young singer, Diana Ross, (Karis Anderson) that not only captures the world’s imagination, but all draws the romantic attentions of Gordy.

As Gordy focuses all his attention on Ross in a bid to make her the biggest star in the world, the other Motown acts begin to defect, and move onto more lucrative contracts elsewhere; with Gordy gambling everything he created all in the name of love, only for it all to come crumbling down.

Motown The Musical is as ambitious as it is entertaining, however sometimes its scope gets the better of it. Undoubtedly the story and tunes lend themselves perfectly to musical theatre. Where the production falls short is that it tries to do too much in the short space of time it has, you only really scratch the surface of what was happening with Gordy and his acts. In addition, the show crams in over 60 songs, in the form of medley’s or snippets of songs, just as you’re getting into one song it blends into another, which at times is quite distracting.

When the show does get it right, it is bang on point, a heart-breaking rendition of What’s Going On against the backdrop of a riot in the wake Martin Luther King’s assassination is captivating, as is the joyous recreation of The Supremes performance on Ready Steady Go are just some a couple of the set pieces it does well.  These are undoubted highlights because they allow the show and the audience to take a breath and offer a snapshot of the times.

Where the production excels is in its cast: Baruwa is on great form as Gordy, both charismatic and fragile in all the right places. Anderson is bang on point as Ross, as we see her grow from cheeky schoolgirl to global superstar. The supporting cast are equally 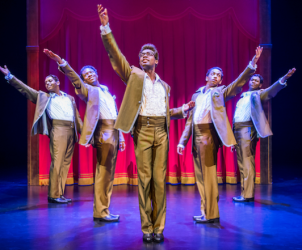 great, with solid turns from Matthews as Smokey Robinson and Shak Gabbidon-Williams as Marvin Gaye, both have silky smooth voices like velvet. Tonight two cameos nearly steal the show: the first coming from Ike Machie as young Michael Jackson, who turns in an energetic, spirited performance. The second was a rather unexpected treat from Carol from Halifax, who was a lucky audience member invited up on stage to sing with Anderson who brought the house down! Not every show will have a Carol from Halifax but maybe they should! A huge amount of credit must go to the huge ensemble cast who work their socks of throughout.

It’s not just the cast that are on great form: the band is led by musical director Griff Johnson are equally up to the task, ploughing through over 60 tunes, adding in a bit of soul, funk and disco – they certainly have you tapping your feet.

Projectors are used to great effect throughout, using archive footage of monumental events as the Vietnam war, the assassination of President Kennedy, Bobby Kennedy, and Martin Luther King to anchor the show and give it context.

Motown The Musical may at at times frustrate, but it certainly will entertain and have you bopping in your seat. This is the perfect introduction to people unfamiliar with this genre of music, and for diehard fans it offers an entertaining trip down memory lane, and for those inbetween a chance to hear some great tunes performed by some exceptionally talented musicians and singers, that will guarantee to have you dancing in the street, or the aisles at least!