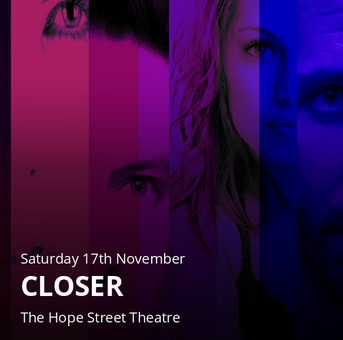 In 1997 actor/playwrite Patrick Marber was riding the crest of a wave: he had not long since had a prominent role in the comedy classic TV series Knowing Me, Knowing You with Alan Partridge. His debut play, Dealers Choice had just been on extensive run in the West End. His second play Closer premiered at the Royal National Theatre in May of 1997: it was a huge critical and commercial success, winning the Olivier best play award in 1998 and spawning a film adaptation starring Jude Law, Julia Roberts, Natalie Portman and Clive Owen.  Closer, without a doubt, was a huge part of the creative revolution emanating from Britain at the time, made all the more remarkable given the bleak, brutal and callous nature of the play.

This is a tale of two men and two women, whose lives become interlinked by the relentless pursuit of love and sexual gratification, although as things progress, they quickly discover that these don’t always go hand in hand.

A near death experience brings Dan, (Sam Donovan) a jobbing obituary writer and the free spirited Alice (Amber Blease) together. Whilst in the A & E department, the pair bond and become drawn to each other. It is here where we are introduced to Larry, (Jake Norton) a dermatologist, who gives Alice a brief examination to make sure she is ok.

A year on Dan and Alice are living as a couple, with Alice acting as the writers muse for his impending debut novel.  Whilst at a photo-shoot for his book, Dan meets photographer Anna (Ariana Fravel) and instantly falls in love with her. Despite rejecting his advances, there is clearly an attraction there. What follows much resembles an episode of Love Island if it were to take place in Dante’s Inferno.  As the four characters lives become intertwined, they fall in/out love of with one another unintentionally and intentionally inflicting pain, heartbreak and misery on each other and themselves.

Despite being 20 years old, Marber’s razor sharp script still manages to shock and captivate, punctured with stinging lines and dialogue filled with bile that pretty much hits the mark every time. It’s not all doom and gloom; a scene involving an internet chat room is filled with humour and is outrageously funny.

All four-cast members are on fine form: Norton as Larry plays him like a wounded animal, spitting out his lines with venom. Fravel puts in a measured, restrained turn as Anna. Donovan as is suitably smarmy as Dan, whilst Blease gives a subtle, nuanced performance as Alice: she certainly comes across as the most likeable character in the whole production and the one you want to get behind. There are a few issues with accents slipping from time to time but these are minor quibbles. They all do a fantastic job of bringing some truly loathsome characters to life: showing the flaws, insecurities and desperation, but most of all showing that they are human.

Adam McCoy’s direction is on point: it shows restraint throughout and does not allow the action to boil over into melodrama.  Anna Souter’s minimal but multi-functional set designs serves its purpose as we are transported from strip club to park bench, bedroom to art gallery, consisting of several black stools, and four screens at the back of the stage: cold, simple and perfect for this production.

Despite its black heart and mean spirit, Closer is a thought provoking and entertaining production with a creative team at the top of their game. This is the first production by the Hope Street Theatre company and it certainly makes a bold, brave statement of intent   for what exciting productions lay ahead.

Thanks to our friends at The Reviews Hub.

Closer is at the Hope Street Theatre till 17th November.